28/7/2006
The Israeli Occupation Forces are still persisting in its immoral brutal aggressions on the Palestinian people, the latest of which is the military aggression on Ashouja’eyya area east of the Gaza city that have continued for two days, killing 29 and injuring 128. medical resources said that among those whom killed there were seven children, and among those whom injured were 39 children lesser than 18 years, 17 cases of whom are serious or critical, in addition to 7 cases of higher and lower body parts amputations. The resources added that it has been noticed that the Israeli forces used unconventional and unfamiliar weapons in this aggression, in addition to using the artillery and tanks shells. The medical resources pointed that the X-ray images of the killed and wounded persons showed that the weapons used were internationally prohibited, given the excessive and unfamiliar effects of these weapons. The resources added that while delivering casualties out of the places of incidents, first and second level burns were appearing on their bodies; some of these bodies were found so severely burnt and completely black that it was difficult, some times impossible, to identify them.

In view of that, the NSDL assures on the following;

1- The necessity of an immediate intervention to offer protection to the Palestinian civilians, noting that the international response has not yet elevated to the degree of punishing the perpetrators of such crimes.

2- The high contracting parts of the Fourth Geneva Convention of 1949 should take deterrent measures to stop all crimes, which have escalating in pace recently.

3- The demand of the formation of an international investigation committee and send it to the Palestinian territories to touch at first hand the occurrences of crimes against the Palestinian civilians whose economic, social, and cultural rights are being violated daily, in addition to the policy of collective punishment being practiced persistently against them, comprising the deprivation of water and electric power.

4- The NSDL reaffirms its condemnation of grave Israeli escalation in the Occupied Palestinian Territories.

5- The NSDL reveals its great concern regarding the fall of more victims among Palestinian citizens and destruction in their properties, given the perpetual Israeli threats, by which the Israeli government has given its troops the green light to execute assassinations and incursions in the Gaza Strip since 52/6/2006. 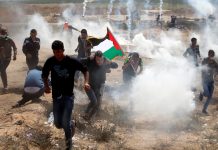 The Israeli Occupation Forces Kill 2 Children and Wound 76 Citizens in the 73rd Friday of the Return Marches.

A Delegation from Sawasya Programme visited the headquarter of NSDL in...

A high-ranking delegation visited the partners of SAWASYA II programme on...

A high-level delegation from the Office of High Commissioner for Human...

admin - October 7, 2019
0
On Sunday October 6th 2019, the National Society for Democracy and Law opened a mural within " we are all the same" initiative, which...
© All rights reserved Modern Technologies Company
MORE STORIES

The Israeli escalation in the Gaza Strip continuing and martyrs numbers...